More on Thai cultural values (and how they differ across groups)

In my summary of Thai cultural values, based on Suntraee Komin’s work, I outlined the nine clusters of values that explain much of Thai culture and behaviours. In this article, I will outline the origins of the author’s approach and highlight some of the differences in values seen across different groups in Thailand.

The overall approach to measuring human values goes back to the work of Milton Rokeach, outlined in his book The Nature of Human Values from 1973. Rokeach defined a value as “an enduring belief that a specific mode of conduct or end-state of existence is personally or socially preferable to an opposite or converse mode of conduct or end-state of existence”. Rokeach implies two types of values in the above: instrumental values and terminal values (i.e., means and ends).

Suntaree Komin built on this work by conducting a content analysis of open-end questions on goals, two major Thai newspapers, literature on Thai culture and personality in addition to looking at Rokeach’s 555 personality traits and their Thai equivalents. She also conducted a pilot test-retest study of the reliability of her revised test with a gap of 6 weeks between evaluations.

The result of this work is that some of the values in the Thai Values Survey had not appeared in the original American list of values, and some were localized to better reflect Thai culture. Terminal values of brotherhood spirit, social relation(ships) and status-wealth were added, and seven instrumental values were added or changed: grateful, caring-considerate, responsive to situations, calm-cautious, contented, interdependent, and mutually helpful

So what were the results? In this article we will focus on Terminal values (see our previous article to look at instrumental value results).  The top five values across the total sample were:

The ranking of the values is fairly consistent across male and female participants, although men rank national security first and women rank family happiness first. Looking at values across age groups, family happiness is less important for those 40 years and over and national security is less important to this age group. Self-esteem, success in life, true friendship and freedom are more important to younger age groups, while brotherhood spirit, religious-spiritual life and a world at peace are more important to older age groups.

Arguably the most important differences are between urban and rural populations (and specifically Bangkok versus other regions of Thailand). Family happiness, self-esteem, success in life and true friendship are more important to Bangkokians than to other Thais. National security, brotherhood spirit and especially religious-spiritual life are much more important for Thailand’s rural population. 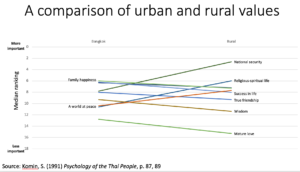 Suntaree Komin also outlines differences by income levels, education, occupation and geography in her book. As a reminder, Thais rank national security, family happiness, self-esteem, success in life and comfortable life as their top five values. In similar studies conducted in USA around the same time, the top five values are a world at peace, family security, freedom, equality and self-respect. While there are some similarities, there are also some meaningful differences in the priorities of Thais and Americans (as you would expect).

Suntaree Komin’s work is foundational in understanding Thai culture and the values of Thai people. The Psychology of the Thai People is not an easy book to read, and packed with data and tables, but is worth trying to understand if you want to dig deeper than the standard ‘culture shock’ literature into the realities of Thai culture