The end of year lists are out and they mostly reflect a very sombre past year.

Collins have named ‘permacrisis’ as the word of the year. The word means, “an extended period of instability and insecurity”, and who couldn’t argue that this is a fair reflection of 2022? Most of the dictionary lists are based on the most popular online searches for new words and, for Collins, partygate, warm bank, quiet quitting and sportswashing are among the runners up.

Meanwhile, Merriam-Webster chose ‘gaslighting’ which they define as, “the act or practice of grossly misleading someone especially for one’s own advantage”. The word saw a 1740% increase in lookups and originates from the title of a 1938 play and movie about a man who tries to make his wife believe she is going insane. Among Merriam-Webster’s runners up are ‘omicron’ and ‘oligarch’.

Finally, Oxford have named ‘goblin mode’ as the word of the year. I have to admit that I had never heard this term before. It won in a landslide public vote over metaverse and #IStandWith. Presumably, the over 300,000 people who voted for the word pulled themselves away from goblin mode, as the dictionary defines the term as, “a type of behaviour which is unapologetically self-indulgent, lazy, slovenly, or greedy, typically in a way that rejects social norms or expectations”.

Reflecting a desire to move away from the negative associations of 2022, Pantone have named their 2023 colour of the year as ‘Viva Magenta’. Pantone describe the colour as, “all about optimistic celebration, experimentation, and unrestrained self-expression. … PANTONE 18-1750 Viva Magenta descends from the red family, and is inspired by the red of cochineal, one of the most precious dyes belonging to the natural dye family as well as one of the strongest and brightest the world has known.”

Viva Magenta is certainly very bright and vibrant. Here’s to a bright and colourful 2023! 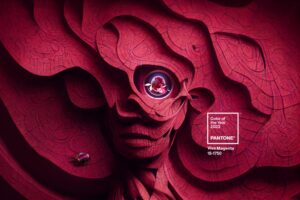