The semiotics of office space

Reading Using Semiotics in Retail and a conversation about a project on the interface between work and lifestyle with shifting working patterns, I was reminded of previous writing on design of spaces, a topic I covered in Brand esSense.

Many companies have woken up to how the design of space can communicate and support their company culture. Most famously, Pixar’s offices were designed by Steve Jobs to maximize the number of random interactions between employees across all company departments (and Apple’s retail experience is an expression of their company values).

The open plan nature of Pixar’s office space, huge atrium at the main entrance area, location of toilets in one central place, and high traffic staircases all ensure that employees cannot avoid accidentally meeting other employees from other divisions. In fact, original plans for the office were rejected, as they would have spread the different divisions across separate buildings.

Pixar’s offices also have many more common areas than are necessary, such as multiple cafeterias, encouraging employees to read and work outside confined offices. This is a design feature that they share with Google, along with an emphasis on areas that hold two or more people.

Pixar encourage creativity by allowing each employee to personalize their own office space, creating a sense of fun and individual expression that epitomizes the company. And they reinforce the company culture by making prominent use of toys and statues from their current film projects, reminding employees of why they are there and how successful the company is.

The meaning of space

While many businesses can’t afford to invest in their office space in the same way as Pixar and Google, they should always think hard about the design, materials, colours and layout of office space. Semiotics is one of the tools that can help companies interpret the meanings behind the design of working spaces.

Take, for example, the imposing wooden bookcases in this office. What do they communicate about the office’s occupant? It’s more likely that this person is serious and traditional than fun and the bookshelves speak of learning. This is not someone who shares or interacts, but someone who is aloof to others and works by themselves. 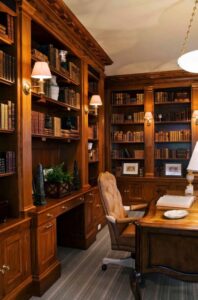 Although, the office space below is occupied by many more people, and has a much more modern design, the cubicles also reflect an environment where people work on their own without interaction. The rows of seats and cubicles speak to a ‘factory’ culture rather than one of creativity and individual expression.

By contrast, this office space is designed to foster interactions, with open space and multiple seating around shared tables. The brighter colours also reflect a more contemporary, youthful and upbeat personality than those in blacks, greys and whites.

What signals are you sending?

The materials used can also reflect on your company’s values. While many companies use the latest plastics to synthetic materials, others rely on more natural ones. Even at Pixar, with its very contemporary feel, the steel and bricks were purposely designed and treated to create a very natural feeling, arguably more so than the dark woods of the book lined office. Such naturalness is a combination of the materials used and the use of space and light to create a feeling of openness and human connection.

So what are the signals that your office is sending, and how can semiotic analysis help you to send the right signals to match your company’s cultures and values? In analyzing a large number of office spaces I found four key dimensions that are visually communicated through the designs, in terms of the materials used, the design of space and lighting, the colour of furniture and fittings and the layout and arrangement of individual working spaces.

Does the design signal the importance of group collaboration or individual working? Does it feel open and spacious or closed off and isolated? Is the feeling of the surroundings natural or artificial? And does the design communicate traditional values or a more modern approach to business?

For example, I used to work in an office space on Duxton Road in Singapore. The office is in a traditional Chinese shophouse, with a large open space and high ceilings. The materials and fittings felt traditional and natural (with original wood beams and black and white colour scheme). I sat with colleagues from another company around several tables, so we could all talk easily with one another. And although there was no direct sunlight downstairs, the open space feels relatively light and natural. Overall, this was (and still is) a collaborative, open, natural and yet traditional office space.