Where you are versus who you know: the reality of social contagion 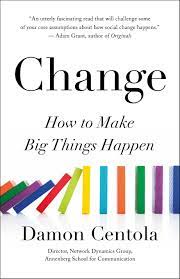 In Change, Damon Centola starts by demolishing the myth of the influencer. Centola argues that change, especially social change, is about where you are more than who you know. Have you ever heard of Claudette Colvin or the half dozen other women from Montgomery, Alabama who were arrested for not complying with bus segregated seating? You probably have heard of Rosa Parks who had a social network to support her.

Change is a problem of coordination between socially connected people, driven by the percentage of people who do something rather than the absolute number. If you are in a group of 4, and 2 people start doing something different, you are likely to copy them. If that is 2 people in a group of 100, then you will not.

Centola also discusses the six degrees of separation (Stanley Milgram) and some of his own research into the different effects of weak ties and strong ties in social networks. He found that social media technologies, social movements and social norms spread through overlapping networks of strong ties. For example, the use of Twitter spread geographically, from neighbourhood to neighbourhood (starting in the Bay area of San Francisco and then spreading to San Mateo, Santa Clara and other nearby towns).

History has many great innovations that were beaten by lesser innovations, including the Dvorak keyboard (vs QWERTY) and Betamax (vs VHS). Centola argues that these failures are because of the ways the companies used social networks and not because of the quality of their products. As one sage wrote, “culture eats strategy for breakfast”.

Centola puts it differently, focusing on the “infrastructure of contagion”. Specifically, he talks about “wide bridges” (i.e., groups of people connected to other groups of people) where redundancy is more important than reach. For example, from locations around San Francisco, Twitter usage then leapt to Cambridge, Massachusetts because of the strength of ties between the two communities.

Centola outlines three rules of relevance to drive contagion. The first is that social proof works best when people see that an innovation will be useful to them, and that similarity with early adopters is important for this. The second is that when emotions and feelings are key, similarity will again help drive behaviour change. However, when legitimacy is important (i.e., believing that a behaviour is widely accepted) then diversity and not similarity will help spread the idea.

Put another way, these three rules reflect the importance of credibility, solidarity, and legitimacy in driving diffusion of an idea across different audiences. The right strategy for virality depends on the context of the idea and the specific target audience.

And, above all, change is all about being in the right place at the right time.