Are emotions MINE or OURS?

In Between Us: How cultures create emotions, Batja Mesquita dissects how culture shapes our emotional world. She starts with the Pixar movie Inside Out, and discusses how it might have looked if it was named Outside In. Are emotions really all inside our head, regardless of the situation and the people around us? 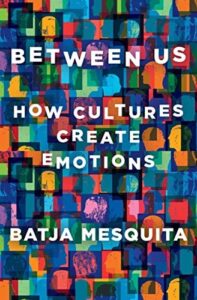 While Inside Out captures the way emotions are understood in Western or WEIRD (Western, Educated, Industrial, Rich, Democratic) cultures, as Mental, INside the person, and Essentialist (MINE), in non-WEIRD cultures emotions are more likely to be OUtside the person, Relational, and Situated (OURS). It might be more useful to understand emotions by looking outward rather than inward.

In one chapter, the author discusses how experiences of anger and shame are very different in different cultures (for example, Japan versus United States). She draws on writings and work done in “honour cultures’, where dignity and respect are drivers of these emotions.

By way of contrast, love and happiness are also very culturally situated. In cultures that value the individual, love may be the ultimate goal for individuals to find mutual admiration and attraction. Does that make this interpretation of love WEIRD? Other cultures prioritize relationships and group goals over individuals.

This may be the reason that romantic love is less valued in some cultures. For example, in China love can be associated with sadness and characterized as negative. This is also seen in the Japanese word amae that is used to described interdependency, especially between mothers and their children. Some cultures value having more friends, while others value having fewer.

Language does shape our experiences. Although the importance of individual emotional words can be overstated, Tiffany Watt Smith’s The Book of Human Emotions shows how many emotions are very culturally specific. It is surprising that many languages do not have a word for emotion, and in many emotions are grouped with other sensations (e.g., fatigue, pain). This may reflect that emotion is, historically, a very new category.

Emotions more often happen between people rather than within people, and this new book explains how and why. It builds on the work of Lisa Feldman Barrett (read more here and here) exploring in much more detail how different cultures are reflected in our emotional worlds.

How Emotions Are Made: The secret life of the brain by Lisa Feldman Barrett

Between Us: How cultures create emotions by Batja Mesquita

The Book of Human Emotions: An encyclopedia of feeling from anger to wanderlust by Tiffany Watt Smith