Review of Gin Glorious Gin: How mother’s ruin became the spirit of London 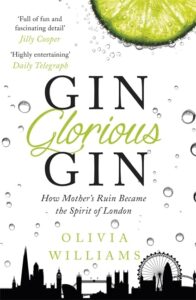 Olivia Williams’ Gin Glorious Gin is an entertaining cultural history of the complex relationship between gin and the city of London. The book starts with William of Orange landing on the Devon coast in 1688 and finishing with the twenty-first century’s gin renaissance.

There is much discussion of the Gin Craze and, of course, William Hogarth’s Gin Lane (and Beer Street) and the social development of London. To some, the growing independence of women seemed to be more a problem than drunkenness!

Among the more famous gin drinkers are Lord Byron, who claimed that all his inspiration came from gin and water, and Charles Dickens, who wrote about the evils of gin but was also partial to the Summer Gin Punch served at the Garrick Club in Covent Garden.

Charles Dickens is perhaps the most famous chronicler of London, and Gin Glorious Gin sometimes reads like one of Dickens’ famous walks around the back streets of London. It’s a great read for anyone interested in London, gin or, more generally, cultural history.